Jerry Rice is still the Man! 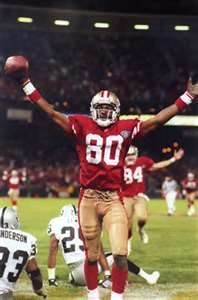 As this NFL regular season comes to a close we have seen some great football and some incredible play. AP of the Vikings came back from a terrible knee injury and is on the verge of breaking Eric Dickerson's rushing record. The Vikings have no significant offense except for AP so everyone is loading the box to stop the rushing game. I hope he breaks the record. He is the toughest and greatest rusher of the modern era.

This weekend we also saw Calvin Johnson (Megatron) of the Lions break Jerry Rice's record. Well, congratulations for that. Johnson is a beast and the best WR in the game today. However, if it were up to me I'd put an asterisk by this record. This is clearly a passing league and the rules are set up to favor that. Hell, if you as much as sneeze on a WR going downfield a penalty flag is thrown. Jerry Rice played in an era where he didn't have such luxury. If he had, the record would be so far out of reach that it would not be breakable. Sorry, Megatron. You're a great reciever, but Jerry Rice is still the man.

Kudos to Peyton Manning. The guy had a bone taken from his hip and fused in his neck and is still kicking ass. I'm not sure who deserves comeback player of the year more...AP or Manning. Tough call. Glad I don't have to make it. ﻿ 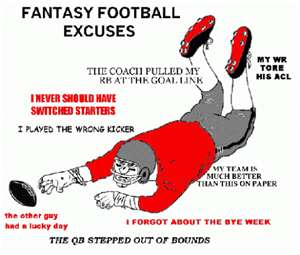 I haven’t updated this section in a long time but let’s talk a little fantasy football. Most of FF geeks have gotten our magazines and cheat sheets by now, so I’ll keep this short by only sharing thoughts on a few players. If you’ve done your homework then you already have the top players at each position and ready to draft in your league. And then there are the no-brainers that you have to pick if they are available such as Aaron Rodgers, Tom Brady, Drew Brees, Arian Foster, Ray Rice, Calvin Johnson, and LeSean McCoy.

This year it is worth considering putting off drafting a running back too eary because it seems that teams are using two and three backs. The importance of a stud running back isn’t nearly as important as it used to be. Michael Turner of the Falcons has been a top running back in FF for the past few years. However, approach drafting him with caution this year. The Falcons are in the second year of their offensive scheme to spread the field and open up the passing game. He may get less touches this year. Also, he is now 30 and we all know that production goes down at that age. I feel the same about Frank Gore of the 49ers.

The wide receiver position is vital this year. One player I like a lot is Jordy Nelson with the Packers. I haven’t seen a FF magazine yet that has him in the top 5 at the position. It would not surprise me if he duplicated last years’ numbers and finished the season easily in the top 5. Move him up on your draft board. I am avoiding Andre Johnson because it is just a matter of time before he misses games due to injury. Brandon Marshall, on the other hand, will flourish with the Bears as long as he improves his red-zone play. I also expect another good season from A.J. Green of the Bengals.

My next udate will tackle some QB choices including the Manning brothers. And yes, Eli is elite. Any idiot sports writer that says the clutch QB with two rings isn’t should write about something else other than sports.

Pitchers and Catchers report for Spring Training beginning Feb. 18th. The list of teams reporting dates are below! 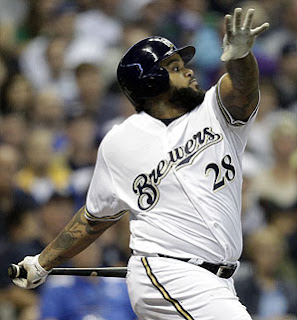 Prince Filder is a very rich man. This past week he signed a 9 year, $214 million dollar deal with the Detroit Tigers. Last season the Tigers finished 95-67, first place in the American League Central. They eventually lost in the playoffs to the Texas Rangers, who represented the AL in the World Series. Detroit has been a solid and consistent team the past couple of years and was just one good hitter away from making it to the World Series. This year they will come into the season as the favorite to win their division once again, and this time have a 40 HR hitter with about 120 RBI's. It will be a long season, but if the Tigers can stay healthy and get the same production from their pitching rotation, they should be able to once again contend with the Yankees and Rangers for a shot at a world title.

With both Fielder and Albert Pujols both jumping from the NL Central, that division should be more competitive than it has been in the past couple of years. With Filder no longer in the line-up in Milwaukee, and with Braun facing a 50 game suspension, the Brewers might be mediocre at best. As we get through Spring Training I'll give my picks for the season and see how close I can get to reality at the end of the season.

What will be better: The game or the commercials?

After a week of watching bits and pieces of sports shows and listening to sports talk radio, the questions are already flying. Is Eli elite? Will Brady and the Patriots get revenge after losing to the Giants in 2008 after a near-perfect season? If Eli and the Giants win, does that put little brother a in class above Peyton Manning?

The hype for this game is already ridiculous and will only get worse in the days leading up to the Superbowl. I wonder if I'm the only one that's going to tune out all the hype and just tune in for the game on Feb. 5th and enjoy some goofy commercials.